Nothing could seem simpler than adding audio to picture. After all, multi-track audio in cinema has been around for 30 years, and the requirements should be well-known. But, in truth, nothing has been more neglected than audio in digital cinema. It is the very idea that it is simple which has blocked many from understanding just how complex it can be.

SMPTE 428-3 DCDM Audio Channel Mapping and Channel Labeling does little of what its title suggests. However, if one wades through the document, 26 potential channels of audio are documented, all taken from existing use. If adding the ability to handle two-languages of accessible audio, then the number grows to 28.

For whatever reason, a bet was made in SMPTE that no more than 16 of these would be used at one time. As a result, the SMPTE distribution package can only contain up to 16 channels of audio. However, the intent was to be able to carry any subset of 16 taken from the possible 26 or 28 channels (or more should new channels come into practice).

In practice, only three formats made it into the standards:

But standardized formats pose an unwanted limitation on creativity in the marketplace. They do not address how to carry any imagined subset of the possible 26 known audio channels. For good reason, as to document such a maze of possible formats would be a mess.

There are a few ways for bringing flexibility to the marketplace. The simplest way is to add more channels to the distribution format to encompass all possible channels. Short of such a miracle, the next best thing is to label the individual audio channels so that downstream devices can figure out what to do. This second approach is how audio for digital cinema was originally conceived.

But the original concept was never fully carried out. There remains no agreed method for labeling audio channels in digital cinema. Dolby once tried to standardize a proprietary method for labeling audio, but the proposal was rejected. Seeking action, Brian Vessa, Executive Director of Audio Mastering at Sony Pictures, has taken on the role of driving standards for this purpose.

Several groups have resulted. Brian vice chairs the 31FS-10 Working Group on MXF Multichannel Audio. This group is determining how to insert audio labels in the MXF audio distribution file for both broadcast and cinema applications. The group is currently preparing for ballot a document titled MXF Multichannel Audio Labeling Framework. Brian also chairs the newly formed 21DC Ad Hoc Group for Audio Channel Labels. As the name suggests, this group will sort out the audio labels themselves. Largely, this second group will be responsible for cleaning up SMPTE 428-3 DCDM Audio Channel Mapping and Channel Labeling, which as said earlier, doesn’t live up to its name. Improving 428-3 has been a discussion item for several years, but with the MXF framework draft now in a mature state, there is clearly a purpose for doing so.

The result of these efforts will be a distribution format that, while limited to total count of 16 channels, can be any 16 channels desired by the movie director without the need to standardize a new format. While this will encourage creativity in the distribution format, it doesn’t solve all problems for the cinema itself. The cinema must actually connect these labeled channels to hard-wired speakers.

The job is trickier than it sounds. Based on formats now in use or in discussion today, a potential theatre wiring diagram was first published in the May report. Such a wiring diagram, by channel number, could look like this: 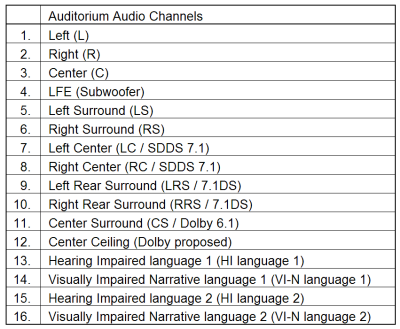 All of these channels are unlikely to be in single distribution, but it is likely that a cinema in a country that requires dual language support for accessibility will be so wired. All it takes is for a creative director to add one more channel to break the system. The point is that a cinema could require more than 16 hard-wired audio channels, even though the distribution format is limited to 16 channels.

In such a case, the audio signal path will need to know which audio channels are included in the distribution for proper routing. If the capability to support more than 16 outputs is not built into the media block, then the audio processor needs to understand which channels it receives. Performing this task in a downstream audio processor is not a preferable concept. It would add an extra layer of complication, a layer that is not defined in the standards today.