ISDCF held its virtual “plugfest” this month. In test were nine different compositions packaged in SMPTE DCP format by eight different mastering houses. In turn, the DCPs were tested on five different systems, from Doremi, GDC, Dolby, Sony, and XDC. It is worth noting the complexity of these tests. There is no such thing as “reference” SMPTE DCP content and a “reference” player. As problems can appear in both content and players, sorting out test results can be difficult. This, in part, is what led to awkward test results in the July plugfest, where a limited number of DCPs were available, and every player had problems with them. It took months to sort out where the difficulties originated, and in the end, it appears that multiple problems led to the unexpected results.

This month’s plugfest was “virtual.” Rather than meet in a test facility, where each manufacturer sets up its equipment alongside other manufacturers, the tests were conducted privately by each manufacturer at its facilities. Results were reported to ISDCF.

The results were favorable. Some DCPs were playable on all five systems. Some DCPs played on some systems, and not on others, or at least, not without problems. Investigations will follow to learn the cause of difficulties. Due to the nature of these tests, problems could have occurred in the DCPs themselves, with some systems more tolerant to faults than others. Such behaviors are well-known with Interop DCPs. (Which leads to no end of finger pointing when trouble occurs.)

More mastering houses, including Fraunhofer, participated in this plugfest to test their SMPTE DCP packaging software. Remarkably, two test DCPs with captions are now available free of license. Fox packaged the Sintel open movie project, and makes the AES encryption key available for those who wish to create their own KDMs. In addition, Universal generously donated eleven minutes of its movie Johnny English, for which Dolby has produced a SMPTE DCP, and Dolby is managing the KDMs. This is important news for system developers, as they now have motion picture content with captions available for test that will not expire every two weeks.

Logistic issues pushed ISDCF into the “virtual” nature of this plugfest. While there was concern that this format would produce results, the degree of participation by the vendors, and the openness with test results, was remarkable.

The original ISDCF Timeline for Accessibility, first discussed in June of 2009, set the target date of April 2011 for the large-scale rollout of SMPTE DCP content. That date will likely not be met. More testing is required before both mastering houses and manufacturers can confidently state that their services and equipment adequately supports the format. More time is also needed to rollout the upgrade itself. But October of 2011 may be possible, or April 2012 could be a reasonable target. A new date will probably be set in the coming months.

Notably, the change in date will not affect the rollout of accessibility in cinemas. In truth, it can be claimed that the April 2011 target date for accessibility has been achieved. In June of 2009, it was not anticipated that an Interop version of closed captions would become widespread. The thinking was that manufacturers would focus on the transition to DCI compliance, which requires a transition to SMPTE DCP. But support for Interop-compliant accessibility has grown, to the point where widespread accessibility is no longer reliant on the SMPTE DCP format.

The one element that was not complete in the Interop specification was the handling of audio in the 16-channel distribution format. That bridge was also crossed at this month’s ISDCF meeting. Interop audio has the shortcoming that it can only support one 16-channel format. However, there are at least three audio formats in use today, all of which must be represented in the one 16-channel distribution format. The result is that shown in “Table 4” below. 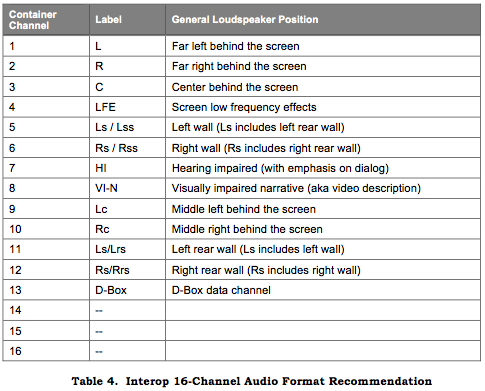 For compatibility with older 8-channel systems, accessibility audio HI and VI-N were agreed to be on channels 7 and 8. (This is contrary to, but a necessary departure from, the previously preferred channels of 15 and 16 for HI and VI-N.) Also, a channel was assigned for the “D-Box” motion seats control track. The “Table 4” layout is significant in other ways. It prescribes the auditorium wiring of audio outputs in all cinemas. Memorize this. We’re going to be living with this wiring scheme for a very long time.