2010 has been a remarkable year for digital cinema. The growth in screen count was phenomenal and unexpected. A year ago, it was expected that sales would drop following the substantial growth that occurred in anticipation of Avatar’s successful 3-D release. To the surprise of most manufacturers, the success of Avatar encouraged even more cinema owners to get into the digital game. This brings to light the high expectations that 3-D has instilled, both in cinema and in the home. See our 3-D section of this month’s report for more on this important subject.

Digital cinema took significant steps towards maturing. TI DLP CinemaTM projectors are now DCI compliant. But they are the only equipment thus far to achieve this long awaited milestone. Accessibility became a household word among equipment manufacturers, in a manner never before seen in the cinema industry. The eccentric demand by some studios for telecom modems in security key management withered away, and open network-based tools for open key management began to emerge. Satellite delivery of content in the US took steps forward, although this remains an area with a dubious future. Our thoughts on the future of content fulfillment and of mastering appear later in this report.

TI 4K projector prototypes were demonstrated with little fanfare. 4K requires the media block to be installed in the projector, prompting the movement towards commodity media blocks to take a step forward, with the questionable formation by Dolby, USL, XDC, and Mikrom of the Digital Cinema Open Systems Alliance (DCOSA). This receives more discussion in light of the entire transition that is in store for media blocks and cinema software, in our discussion of The Projection Booth later in this report.

With DCIP’s funding in place, the promise of the deployment entity blossomed, with DCIP installing more screens in one year than the entire inventory of installations for every other deployment entity in the world, save Cinedigm. (And that exception is on track to be toppled in 2011.) The growth of digital screens in the US, coupled with the limited nature of studio VPF subsidies for the replacement of film projectors with digital ones, drove exhibitors outside the US to launch into deployment deals. These deals came in all flavors, exhibitor-financed, deployment entity-financed, and direct-to-studio. But the studio appetite to continue with subsidies is waning. The rollout period for most US deployment entities will cease in 2012, and as elsewhere in the world, the amount of subsidies for new deployment deals will be less.

If there were ever doubts that Hollywood-driven digital cinema would succeed in expanding around the world, they were vanquished in 2010. Fundamentally, there is no challenger to the DCI format, given its attention to the security of copyrighted content, as well as the quality of presentation. But it took awhile for broadcast techies to admit it, and for politicians to stop waxing about it. (Although the French continue to refuse to recognize the work of SMPTE, deferring to their ISO versions.) In a welcome way, the focus shifted to how smaller exhibitors will make the transition, if they make it at all. This is a rich topic, and one we address in our Deployment Entities and the Transition section of this report.

Looking ahead, the US is expected to reach the 50% conversion point sometime in 2012. Classic technology adoption theory says we should expect a slowdown in the digital cinema adoption rate once this milestone is achieved, as pictured in the diagram below. The adoption of digital cinema today is driven by the ability to raise the ticket price for 3-D, the availability of studio subsidies when converting to digital, and the fear that studios will one day cease to make film prints available. These dynamics will inevitably change, if they are not already changing. We revisit this subject throughout this report. 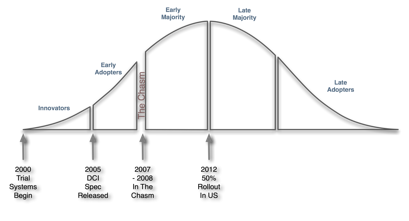