The dynamics behind cinema sound are not well understood. This leads to goofs as reported in the article that follows. And it has led to a very late response, albeit a good response, from SMPTE and ISDCF to the issues that continue to pervade digital cinema audio.

ISDCF made progress this month by accepting, for the 2nd time, a 16-channel audio distribution format for use in Interop DCP distributions. The difference between the newly blessed assignment chart and the previous chart is the absence of duplication of left and right surround signals in channels 11 and 12. While the duplicative “feature” made sense to many exhibitors, it caused abdominal pain among the packaging elite. The attention this chart has received underscores its importance to the digital cinema community. For the first time, the industry has agreed on a uniform method for the distribution of non-5.1 audio formats, and for the inclusion of accessibility audio, in the Interop DCP. 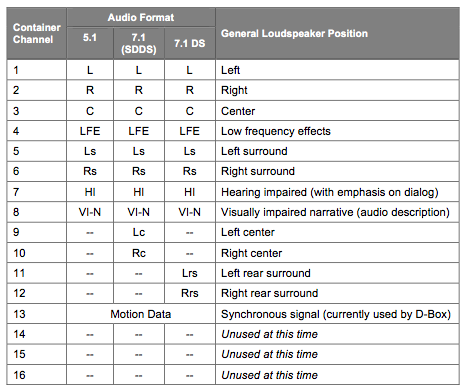 What about SMPTE DCP, you might ask? SMPTE DCP already defines a uniform method for the distribution of non-5.1 audio formats, and for the inclusion of accessibility audio. Nearly two years ago, NATO asked the industry to undergo a transition from Interop DCP to SMPTE DCP, so as to embrace the accessibility features of SMPTE DCP. However, the transition to SMPTE DCP has proven to be complex, as indicated by the slow progress in the ISDCF Plugfests. In addition, NATO achieved its goal, as manufacturers voluntarily improved Interop DCP to also include accessibility. But SMPTE DCP remains a requirement of DCI compliance, which is a good reason for ISDCF to continue its pursuit of interoperability. As a result, ISDCF moved its timeline for SMPTE DCP from April 2011 to April 2012.

ISDCF is also suggesting that packagers and servers make use of the SMPTE 429-2 Audio Channel Assignment Labels in Interop DCPs. This is a more extensive step forward than the 16-channel assignment list shown above. The count of 429-2 ACALs that are available today is three: 5.1 audio, 6.1 audio (5.1 w/ center surround), and 7.1 SDDS (Sony). Later this year, once the updated version of 429-2 is published, there will be 5 such ACALs: the three mentioned, plus 7.1 DS (as used in Toy Story), and an unstructured “wild track format” (the acronym WTF comes to mind) of 16 channels. No interoperability testing of ACALs has taken place, so it would be a gamble if it were put to use. One should assume that no distributor in its right mind is going to distribute such an Interop DCP. But ACALs are a significant part of SMPTE DCP behavior, so its good to tee this up today and have ISDCF begin testing for it.

SMPTE is also taking steps forward with audio, but SMPTE’s actions raise question marks. SMPTE is pursuing an audio packaging method that incorporates “channel labeling,” in addition to the ACAL method described earlier. Channel labeling is a method that labels individual channels of audio. When a left channel is distributed in the DCP, for example, it would be labeled “left,” even though it would be part of a larger array of audio channels. By individually labeling audio channels, it will be more efficient to distribute existing, as well as new and innovative, audio formats.

This effort centers around an activity in the 31FS Technology Committee called Multi-Channel Audio, or MCA. The MCA document will prescribe how to carry audio channel labels in the MXF track file. It hasn’t been doing terribly well. When put to ballot last August, much frustration was expressed by voters that the document was clearly incomplete and not ready for ballot. The document introduces new concepts called Soundfield Group and Group of Soundfield Groups. That not only sounds confusing, but for cinema, unwieldy concepts such as Group of Soundfield Groups are also unnecessary. MCA, it is argued, will be used for consumer packaging as well. We’ll see.

Assuming that terminology will be cleaned up and voter frustration remedied, 21DC will build on the MCA standard and introduce individual audio channel labeling for SMPTE DCPs. Such steps in 21DC have already started. If the carefully planned effort succeeds, it will retire SMPTE 428-3 Audio Channel Mapping and Channel Labeling, one of most useless standards in digital cinema, and replace it with three documents: one to constrain the MCA standard for digital cinema applications, another to define a useful set of audio channel labels for use in MCA, and a third to define loudspeaker layouts. If done right, those that wish to introduce their own audio channel labels and speaker layouts will be able to introduce ancillary documents that define such things. This, of course, includes companies such as D-Box, which use an audio channel for synchronous seat motion data.

While this may sound well thought through, there are cracks. Auditoriums configured for sound formats such as 7.1DS require the switching of left and right surrounds to the correct speakers when playing a 5.1 sound track. Ideally, this would be done in the server or media block, as the server knows when such switches occur. But such decisions also require changes in sound level, which complicates things. For now, the server/media block will have to set a contact closure and trigger the re-routing of audio signals in the cinema audio processor. This requires a capable cinema audio processor, and attention to such detail when configuring equipment.

Another problem that lurks in the background is that Interop DCP defaults to a 16-channel format (as described above), while SMPTE DCP defaults to an 8-channel, 5.1 format. If all servers properly respond to ACALs and MCA channel labels, then all is well. But the DCI Compliance Test Plan does not test such behavior. Instead, DCI only tests for 16-channel support, identical to that used for the default behavior in the Interop DCP. Which brings us back full circle that the default behavior in SMPTE DCP is different.

While ISDCF strives for SMPTE DCP compliance in April 2012, the complications introduced by SMPTE DCP audio are not widely understood. Unless DCI Compliance fully embraces SMPTE DCP audio, it’s safe to say that those interested in the successful playout of movies will be relying the trusty Interop DCP for a long, long, time.