In the US, it is rumored that only digital distribution will be available in a few years. There’s reason to think that, and reason to not think that. This report will look at both.

In our December report, we predicted that the US will have 50% of its screens converted by 2012. That’s not a hard prediction to make. Over the past 18 months, about 70% of US installations were that of DCIP. To participate in 3-D box office, DCIP was rolling out digital projectors even before its financing was turned on, with early exhibitor-paid systems rolled into DCIP as collateral for the full rollout. Its rollout should be complete by end of 2012, which by itself should bring the US digital screen total up to 25,000. The graph below illustrates the DCIP growth rate against other interesting factors, including the growth of non-DCIP screens. 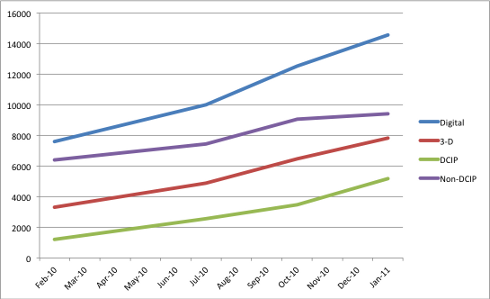 Non-DCIP growth was around 1800 screens in 2010, most all of which were installed under a VPF finance plan. The VPF rollout periods for these plans will expire in 2012. If their rate of installation continues, up to another 3000 screens will be added. Once these VPF rollout periods end, the installation rate will fall. There are other VPF deals in the hopper, but none have all studios on-board nor have resulted in new installations. Altogether, it seems reasonable to expect 28,000 digital screens in the US by the end of 2012.

Some say the US will achieve 30,000 screens in 2013, and that will be the trigger point for cutoff. 30,000 is an achievable number, but not in 2013 once DCIP completes and if VPF financing dries up. Also, 30,000 screens comprise only 75% of the US screen count. It doesn’t seem likely that the remaining 25% will be thrown out-of-business if there’s still an opportunity on the table to profit from box office, even after film print costs rise.

However, it seems like a sure bet that film won’t survive the expiration of the VPF payment term. At that point, the cost of digital print delivery drops dramatically. If that ceiling occurs around the year 2020, then somewhere between 2013 and 2020 film will actually cutoff. Probably not 2013, but also probably not 2020. Those who like to gamble have a narrow range in which to pick their date.