Like an old Beatle’s tune re-recorded by a new artist, it can be hard to convince a younger generation that a seemingly new brilliant idea is really an old one in disguise. Jim Cameron’s magic trick at CinemaCon was to show 48 and 60 frame-per-second content to convention attendees, following in the footsteps of the old Showscan 60fps format, but now using 3-D. Showscan is a high frame rate technology originally introduced by Doug Trumbull, whose patent for the format expired in 2001.

To make such demonstrations special using DCI equipment, one needs to push the envelope. The problem to overcome is that of available bandwidth. Bandwidth determines the detail possible in the picture. The more detail, the more bandwidth needed. DCI places a minimum ceiling on the design bandwidth of compliant media blocks, requiring them to only reproduce up to 250 Mbits/sec of compressed image, independent of image resolution and frame rate. The minimum design ceiling serves as a maximum encoder rate, as there is no guarantee that a media block will handle decoder bit rates beyond this number. To double the available bandwidth for a spectacular demonstration requires the synchronization of two servers. 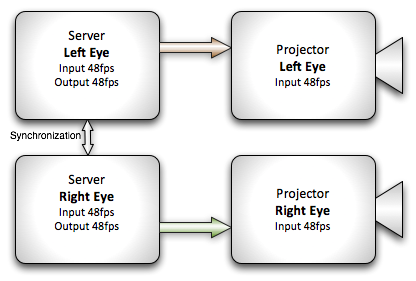 The 60fps demonstration was just as direct. Two servers and two projectors were again used, with each combination server-projector dedicated to one eye. In-projector media blocks decoded incoming content at 60fps. (Block diagram below.) The result was Showscan high frame rate realism in 3D. 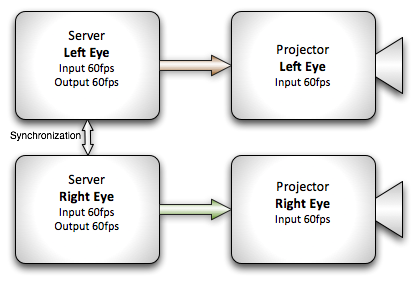 Sadly, this is not something to try at home. These neat tricks are not security-system friendly. And while it’s possible for some off-the-shelf in-projector media blocks to handle 60pfs, what you saw at CinemaCon was not 60fps using a single projector and server. (We’ll have more on the single-projector case in an upcoming report.) Also, don’t expect DCI to change its spec anytime soon. It took 6 years to get the first complete projection system to pass. At a few million dollars a pop to get a product through the DCI testing process, pressure from the manufacturing community will likely keep the DCI spec at status quo for many years to come. DCI sets the norm for world-wide distribution, but that does not preclude special exhibitions. For producers with the money to stage such spectacular demonstrations, there will always be a willing exhibitor to welcome them in their projection booth. However, for the mere mortals in exhibition, something less will have to do.