By way of the odd reminder that studios no longer deliver film prints to all 200 screens in Hong Kong, US exhibitors were again reminded at CinemaCon that film prints could become obsolete in this country by the end of 2013. USA Today picked up on this, noting that exhibitors are converting at the rate of 1000 a month, and this will continue “as box office attendance and revenue climbs.” While some gaffs are expected, there are is no doubt that the world is rapidly converting to digital projection. At the end of March, the US and Canada had 29,500 digital screens, with a total of 70,000 screens installed around the world. It’s estimated that US screens will be at least 85% converted, with over 33,000 digital screens, by the end of the year. VPF rollout periods expire by the end of this year for nearly all VPF deals, after which the rate of new installations will drop precipitously. (Sorry, USA Today analysts.) The graph below, originally presented by Chuck Goldwater at the SMPTE Technology Summit for Cinema, illustrates the growth in the US, distinguishing that for 2-D and 3-D screens. Notably, the 3-D count is leveling as exhibitors focus on filling out their complexes with digital projection. 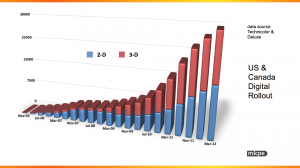 The growth of digital cinema around the world continues to soar. The two charts below, also shown at the SMPTE Technology Summit for Cinema, depict the growth in digital screen count outside of the US and Canada. The second chart shows the degree of conversion that remains to be completed in the different world regions. 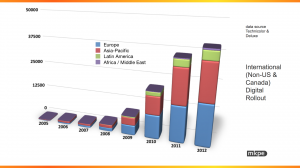 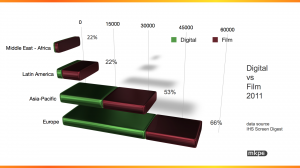 It’s not unreasonable to think that studios will discontinue the duplication of English language film prints end of next year. But they won’t be able to cut all film prints, as the rest of the world isn’t ready. Which then begs the question as to how much more will it cost to print film with English language tracks? It remains to be seen how this materializes, but if one’s iPad can arrive at their doorstep shipped directly from Shenzen, the world is smaller than it may seem. Some enterprising soul is going to figure out how to ship film prints to countries that could benefit. The real question is whether the US cinemas that remain in operation will generate enough box office to undergo the effort.