The count of companies that have announced multi-plane sound systems for cinema has grown to five: Auro 11.1, Dolby, Illusonic, Imm Sound, and Iosono. Distributors concerned about multiple inventory distribution might wish for a few of them to fall off the map. But that’s unlikely to happen. The smarter approach is to rethink sound distribution and encourage a single distribution format. Better to let them each duke it out in the marketplace.

With object-based sound, the sound object does not move across channels. Nor is there a one-to-one mapping of a recorded sound channel to a speaker in the auditorium. Object based sound requires a sound processor in the auditorium to render the intended sound mix correctly. With the degree of CPU power available these days, this task is no longer a big deal. The value it brings is in the form of flexibility to the exhibitor. Large auditoriums can have many speakers. Smaller auditoriums can have less. In both cases, the audience hears the same mix with similar quality. Iosono first demonstrated object-based sound for cinema in 2004 with a single plane speaker array. Today, all such systems have undertaken multi-plane sound reproduction. 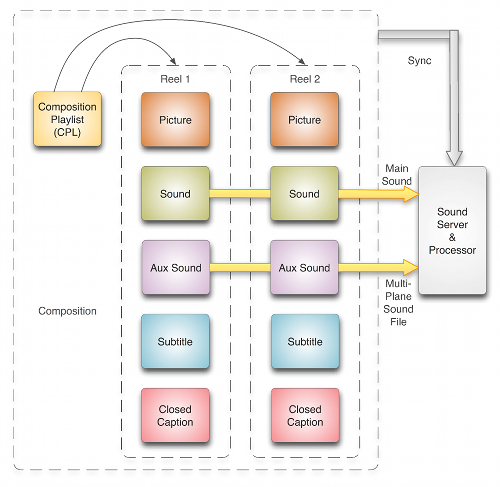 Multi-plane sound can simply add-on to the existing DCP.

A scheme first put into play by Imm Sound and later adopted by Dolby is that of augmenting in the DCP the standard 5.1 audio mix with an Aux Sound file containing the object-based mix and any other sound layers required of the multi-plane sound mix. The concept is illustrated in the figure below. The value of this approach is that it maintains backwards compatibility, allowing a single distribution to play in multiple auditoriums, regardless of the auditorium’s ability to support multi-plane sound.

The idea of a standard distribution is beginning to take root. In this month’s ISDCF meeting, Jeff Levison of Iosono proposed this to the group, putting Iosono’s support behind the single distribution concept, and offering to collaborate with others in the development of it. Dave Schnuelle of Dolby suggested that it was too early to develop a common file format. But one could see the writing on the wall that Dolby would declare it too late to change what they’re doing once a product is released. Now is the time. Although Dave agreed to discuss the idea with Jeff in private with after the meeting, it’s would be a surprise if Dolby were to take a leadership role in this development. But Iosono’s commitment to a single distribution format, however, is solid. Hopefully, more players will jump on the bandwagon, and save the industry from the tragic mistake of the 90’s when multiple distribution formats for digital 5.1 sound were introduced for film.