The classic technology adoption curve has proved useful in the past towards understanding the market environment for digital cinema, and it continues to illuminate why things are so. Our current version is shown below. 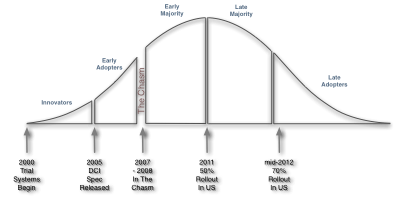 The US market, if not Europe as well, is in the late adopter stage. Manufacturers are selling to a different market than before. Today’s buyers are less in a rush to get the latest and greatest, and more concerned about what it will cost to own and operate. The concern is real, as nearly all exhibitors point to higher operating costs with digital projectors than with film projectors. As a result, Barco hands out sophisticated spreadsheets that allow buyers to compare cost of ownership based on published numbers. Christie advertises more efficient xenon lamps available only for its projectors. And Sony is introducing a smaller projector that uses low cost mercury lamps.

Laser illumination has a role here, too. However, laser illumination has several challenges noted in earlier reports, notably the metamerism problem, worldwide regulatory issues, and the economics of a technology with a high capex versus the high opex of standard xenon technology. Manufacturer estimates indicate that the average payback period for laser illuminators is around 8 years, which is likely to be higher than exhibitors are willing to bet on. Payback is achieved when the upfront capex for laser illumination equals the opex savings that occur by not using consumable xenon lamps and the power savings achieved through laser efficiency.

Of the technologies that are about to enter the market, Sony’s move to use mercury lamps is perhaps the most controversial. Mercury lamps are efficient with light, and multiple lamps are used, which allows the show to go on even when one lamp fails. The controversy, however, is that of spectrum. Pictures being worth 1000 words, we defer to the illustrations below. The first diagram shows the uniformity of spectrum offered by Xenon lamps. 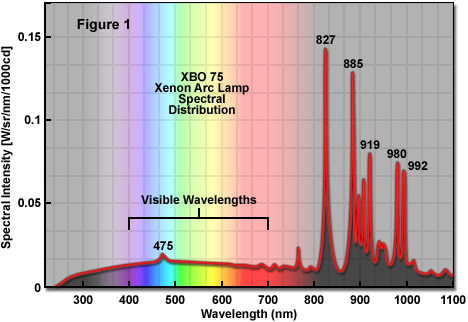 Mercury lamps, on the other hand, do not exhibit a spectrum that is anything near uniform, as can be seen below. 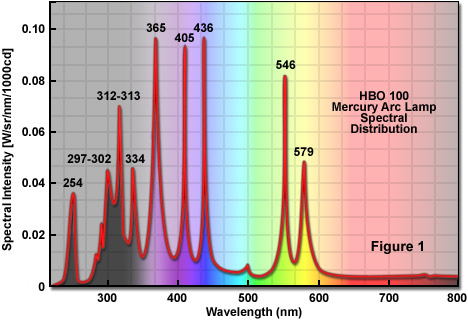 The fact that extensive filtering is necessary to flatten the mercury lamp spectrum is obvious. In a recent demo of a Sony prototype, this author observed both a yellow cast and a cyan cast, depending on light level, indicating that Sony still has some work to do. Competitors believe that once the spectrum is flattened, the efficiency of the lamps will be eliminated. While Sony has pulled rabbits out of hats before, solving this one may require some real magic.