Ten years after the formation of DCI, things have changed. 60% of cinemas around the world have transitioned from film to digital projection. Cinema owners around the world have committed themselves to over US$4B, with no ROI to show for it. The majority of exhibitors say that it costs more per screen to operate digital projectors than with film projectors. While it is true that studios are subsidizing the bulk of the conversion, in the eyes of the banking community, it is the exhibitors that hold the liability. VPF agreements are written so as to insure that studios will not be liable for equipment debts. Whether those debts are off-balance-sheet or on the books, the message behind this is that the industry is tapped out.

Or on the way to tapping out. While the US may be winding down its rollout, several regions of the world are only beginning to ramp up. It’s not uncommon to find it challenging to convince banks that digital cinema equipment is a good investment. If the term of the loan is seven years, the bank wants to know that the equipment can be resold if something goes wrong midway through the finance period. As the US rollout completes, studios become removed from these challenges, forgetting that they still exist.

For the market to thrive, resale value cannot be undermined. At core is the concept of utility. Feature improvements are expected. For example, one doesn’t expect an automobile built today to have the features of an automobile built 5 years from now. But we do expect the automobile built today to continue to have utility 5 years from now, in the same way that the future automobile will have utility. The same is true for digital cinema equipment. We don’t expect the equipment purchased today to have the advanced features that will find their way into equipment 5 years from now. But we expect digital cinema equipment purchased today to still have utility in the future. Ongoing utility, and its first cousin, resale value, unfortunately, are not concepts that made their way into the mainstream of motion picture thought.

If the core spec changes, it will be driven by the pressures that content owners feel. Just as exhibitors comment that digital projectors cost more to operate, distributors are experiencing higher than expected costs. The count of movie versions is multiplying, causing payloads to increase in size and causing the number of KDMs to increase. We all know that KDM management is far from being a piece of cake. But changing the DCI spec to increase the number of features that baseline cinema must carry is a dangerous path to travel. Recently purchased equipment could quickly lose its utility if it doesn’t meet the new spec. Banks, in turn, could become shy of supporting digital cinema equipment.

If such thinking were to take place, the ultimate step would be to cause all exhibitors to upgrade their cinemas to the new version of the spec. Credit worthiness not exactly at its highest, exhibitors would push back hard. But rather than wait for the spec to change, the time to push back is now. Preserve the DCI spec as the definition of core utility of digital cinema equipment. Create optional, satellite specs, if needed, and associated test plans. But don’t combine them. Continue with a solid, core, spec, and let the market drive the adoption of new features and feature improvements. 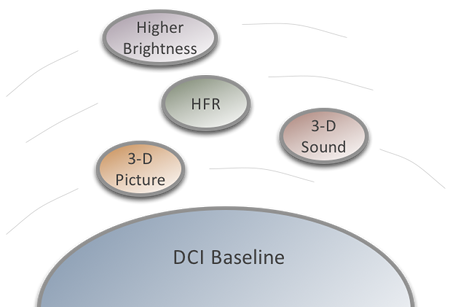