ISDCF began conducting Plugfests several years ago in light of the fact that the industry had no mechanism in place to validate the interoperability of SMPTE DCP distributions. When digital cinema installations first began, dark screens occurred, and interoperability problems were ironed out movie-by-movie. That process was acceptable when the industry had only a few hundred digital projectors, and the exhibitors involved had the characteristic patience of early adopters. But those days are long gone. As the industry continues its hesitation to flip the switch from Interop DCP to SMPTE DCP, the number of digital screens has grown to 75,000. A release flaw that causes a majority of screens to not play the movie would create economic havoc. The value that the Plugfests bring, therefore, as it attempts to alleviate this problem grows commensurately with time.

So it might appear surprising that ISDCF is somewhat switching gears to test the playout of HFR content in advance of the release of Hobbit. In fact, ISDCF has an even tougher task of evaluating the playback of the HFR trailer for Hobbit, in which there’s little time to allow the projection system to settle into a different 3-D frame rate. But it’s doing so because the plan is to release Hobbit’s HFR version in SMPTE DCP. This may add to the risks associated with the release of the movie, but it also prevents the industry from having to upgrade the Interop DCP format with support for HFR, and further delay the transition to SMPTE DCP. Either way, there is risk, and the request by the industry of Warner is to only release HFR in SMPTE DCP.

Ideally, the projector will accept any frame rate sent to it, up to 120 frames per second. But unfortunately, it’s not that simple. Hobbit will be shown in 3-D at 48 fps per eye, so not only will the projector have to respond to a change in frame rates when a Hobbit 3-D HFR trailer appears in a playlist, but so will the installed 3-D add-on system. Of the three different types of 3-D add-on systems, only shutter glasses can change frame rate quickly. Perhaps the most difficult 3-D systems to address are those from Dolby and Panavision, which each utilize a synchronized spinning disk inside the projector. The disc has to resynchronize to the new frame rate, which reportedly can take somewhere between 10 and 30 seconds. That’s 10-30 seconds of black before the 3-D HFR trailer can play, and 10-30 seconds of black before the next 3-D composition can play. This doesn’t make for an ideal show.

A better method for playing mixed frame rate content, when all compositions are multiples of 24, is to create a constant 96 fps stream from the media block to the projector, regardless of the frame rate of the composition. When playing 3-D 24 fps per eye content, the media block would have to double flash the frames to fill the stream. When playing 3-D 48 fps per eye content (HFR), the media block performs normally, as 3-D 48 fps per eye naturally creates a 96 fps stream. For both frame rates, the projector consistently double flashes the content, displaying frames at a 192 fps rate on screen. The results for both cases are illustrated in the figure below. 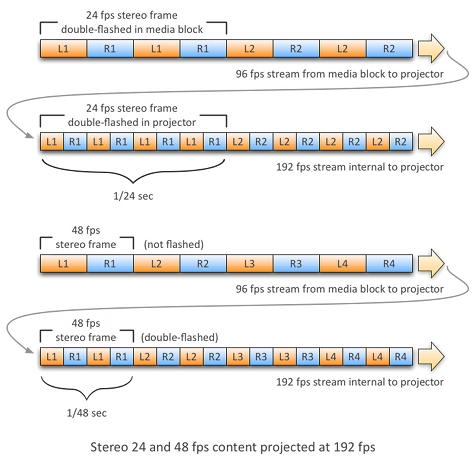 The advantage of this approach is that the 3-D add-on system is subjected to a constant 192 fps rate throughout the show. Spinning wheels won’t have to re-synchronize with changes in composition frame rates, as the media block takes care of the differences.

Notably, for “normal” 3-D 24 fps per eye content, the constant 192 fps stream method quadruple-flashes the images on screen. It has been reported that this offers an improved experience over normal triple-flashed 3-D. The constant stream rate method has been tested by Park Road Post in New Zealand, and presumably will be demonstrated at the upcoming Plugfest on August 7. Most if not all IMB manufacturers appear to be able to support this method.

More on Plugfest results in our next report.