Dolby Atmos is unique as cinema sound systems go. It utilizes both channel-based and object-based sound, and it requires a separate audio server to play and render sound for the auditorium. It’s a sophisticated system that requires more capability than the ordinary digital cinema system. That sophistication will make also make it difficult for non-Dolby servers and integrated media blocks (IMBs) to work with Atmos.

A block diagram for the Dolby Atmos signal path is shown below. 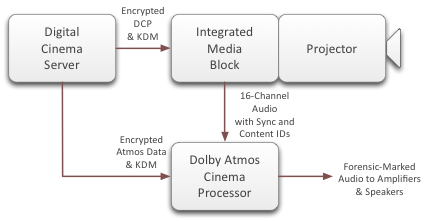 Upon examination, the block diagram begs a few questions. When first announcing Atmos, Dolby made it clear that it would not require a Dolby server and IMB to work. However, when fully integrated in the DCP, Dolby’s process will require that the system can identify the Atmos data track and move it to the Dolby cinema processor. As pictured by Dolby, the movement of that data requires a separate network segment, which may not be available on most products. Importantly, there may not be an outboard server at all given the most recent trend towards integrated media servers (IMS) where both server and media block are installed as a compact unit in the projector. At least one manufacturer has already expressed concern that their newly introduced IMS product may not be able to support Atmos.

Those concerned with the complexity of multiple versions of content inventory need not worry about Atmos adding to the number of versions. Instead, they should worry about the growth in size of the DCP. Compositions with Atmos tracks will also carry a main sound track file, which will contain either a 5.1 or 7.1 audio mix, in addition to the Atmos mix. Notably, there is nothing that prevents the 5.1 mix from also carrying Barco’s Auro3D format. If the Atmos system should fail, or is simply not installed, the digital cinema system can revert to the 5.1 or 7.1 mix. If Dolby’s distribution scheme is followed, only the size of the composition will increase, not the number of versions.

Just when users thought that digital cinema was becoming manageable, it will soon get more complicated. Atmos truly adds a new wrinkle to digital cinema.