Data collected up through the end of 2012 indicates that 89,000 digital screens were in operation at that time, which means that we’re well over the 90,000 mark now. 2012 was another blockbuster year for installations, as shown in the charts below. The impact on the future of 35mm film prints is substantial. 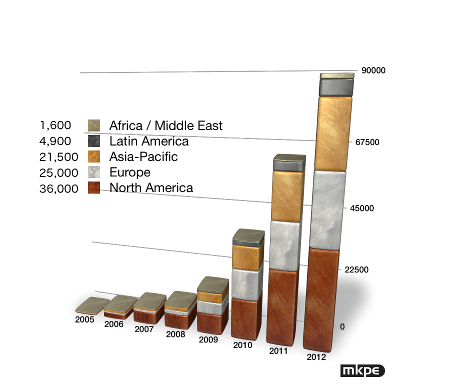 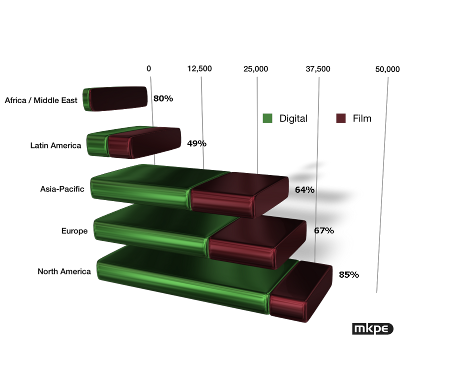 Latin America has been the region receiving special attention lately, where the regional count of digital screens doubled this past year. This growth primarily took place in Mexico, where the major circuits Cinepolis and Cinemex engaged in a rapid conversion of screens this past year. Growth in South America continued to be slow in 2012, although with the passage of a 5-year moratorium on import duties for digital cinema equipment in Brazil, coupled with the implementation of multiple virtual print deals across Latin America, Brazil will lead the way in conversions in South America in 2013. But this deserves perspective. In terms of volume of units sold, the conversion of the remainder of South America will equal one year of new construction in China.

Film has a limited future, and while that future has been cloudy, those clouds may be dissipating. Kodak successfully sold its intellectual property for US$525M in December, a sum that met the covenants of financial entities to bring Kodak out of bankruptcy. That event was scheduled to take place this month, but word on the street is that it will be delayed until June. It was reported that Kodak raised less than it had expected – only 25% of what it hoped – which implies that the new Kodak will be smaller than what was planned. Kodak still operates its massive film plant in Rochester, which was designed to run around the clock. But it appears that the market for film isn’t enough to warrant around the clock operation, creating problems with a tried and true manufacturing process that wasn’t designed for intermittent operation. Studios say that the cost of film print stock has already tripled, and some question their ability to absorb the additional costs past this year.

Film labs are also struggling. In Europe, Technicolor announced its plan to shut down its Pinewood lab outside London end of May. This will cause film prints for Europe to come from Deluxe in the US, and be shipped overseas, adding further to the expense. Shipping costs are already built-in to the cost of film distribution in Latin America, although duplication costs in both Brazil and Argentina, where governments mandate local duplication, could change substantially. Technicolor’s duplication operation in Thailand is also at risk, as Asia’s conversion rate has been substantial. If 35mm film prints remain available after this year, it will be at a cost.