The latest graphical compilation of regional data on the digital cinema rollout is below. Overall, the numbers show 103,500 digital screens installed worldwide, representing 83% of an estimated 125,000 cinema screens. If a 5% attrition number is figured into the calculation, then there are only 15,000 screens remaining that will convert. New builds could add to the near-term market for digital projection equipment, offering a modicum of comfort for manufacturers. It’s estimated that the percentage of 4K screens will either remain at 22%, or drop. Altogether, the current investment in digital cinema equipment worldwide is approximately US$6B. 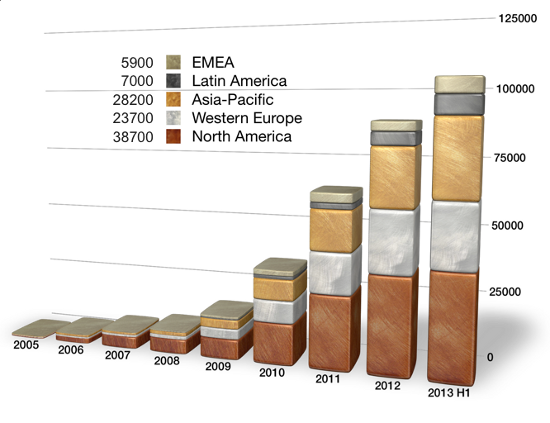 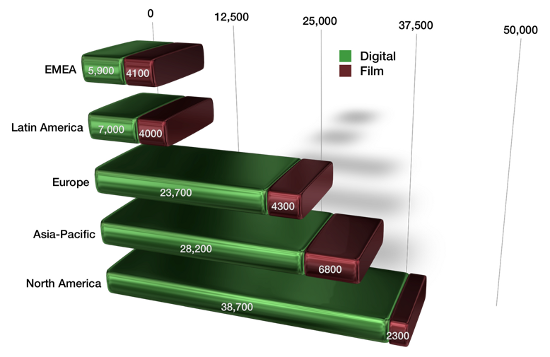 Remaining Screens To Be Converted to Digital Cinema (updated July 2013)

Fox recently reported that 36 countries are now DCP-only, with the expectation that 65 countries would be DCP-only within one year. The US, now 94% converted, would join the group that goes film-less next year. For the many manufacturers who benefited from the phenomenal 30,000 system sequential sales rate experienced over the past few years, it’s time to break out the champagne…while you can still afford it. This publication’s estimate is that it will take until the end of this decade for the equipment replacement cycle to kick in and boost sales, and the numbers still won’t look anything like what just took place.

Unceremoniously, while the rollout moves towards its conclusion, Kodak this month received clearance from the court to emerge from bankruptcy. Earlier this year, after failing to raise sufficient funds through the sale of its patent portfolio, Kodak sold off its Document Imaging and Personalized Imaging operations to its UK pension fund, clearing the debt owed the fund. Document Imaging is largely comprised of Kodak’s document scanner business, and Personalized Imaging encompassed its camera film and photographic paper business. With less revenue-generating operations in its pocket, Kodak will emerge a poorer company than it had anticipated a year ago. The inevitable impact on the cost of film print stock cannot be good news for those exhibitors still reliant on film. At least one studio disclosed that it has not placed orders past the end of this year. All studios have stockpiled hedging against anticipated price increases, and have assessed their risks if having to cut off film before certain markets have converted.

In terms of regions, the most difficult market to convert is proving to be Latin America. While Mexico’s conversion has gone smoothly, thanks to major operators Cinepolis and Cinemex, the rest of Latin America has a long way to go. Brazil, the next largest country in terms of screen count, is only 37% converted. Up until the past year, conversion was delayed in Brazil due to exorbitant government import duties and its advertised intent – yet to be realized – to provide low interest loans to Brazilian-owned exhibitors for the purchase of digital projection equipment. Following a recent event in Sao Paulo with exhibitors across the country, held by Fox, it appears that many exhibitors could face up to another year of delay as they wade through government bureaucracy. Brazil could become the biggest test of Hollywood studio resolve, as dominance in a growing market is weighed against the escalating cost of film.