With over 80% of the world’s screens converted, and the expectation of lackluster sales for manufacturers of digital cinema equipment, 2014 will not be a year of plenty. But it will indeed be a year of intense competition as the last conversions materialize, and it could very well provide a glimpse into the future landscape of digital cinema.

Happily, regardless of the sales cliff, no red flags have popped up for the three licensees of DLP: Barco, Christie, and NEC. These are companies with diversified product lines, and it would be a surprise if survival concerns were to emerge. While the sales division of each company may have to adjust, the presence of these companies in the cinema market is unlikely to change.

On the other hand, Sony is undergoing tremendous changes, instigating cuts across the board. Its studio division announced it would cut up to $350M from its budget, focusing more production on television and less on film. Its electronics division is cutting back yet again, closing plants and offering early retirement packages. With the rosy days of big cinema sales now behind it, and expensive days of maintaining projector warranty agreements ahead of it, digital cinema is unlikely to survive unscathed. Many in the industry have predicted that Sony’s digital cinema projection group will eventually travel the same path as Sony SDDS in the 90’s, where the sales of cinema sound products came to an end, and operations cut to support only warranty and maintenance agreements. It’s unlikely that the same fate is in store for Sony’s digital cinema projectors, but it would not be a surprise to see cinema sales staff cut further and sales put into the hands of rental and staging sales personnel.

The sales cliff is on a lot of minds, placing focus on those regions where future sales will most likely be. To put a point to this, a friend, Patrick von Sychowski, shared an interesting graphic created by Kenneth Myers, shown below. 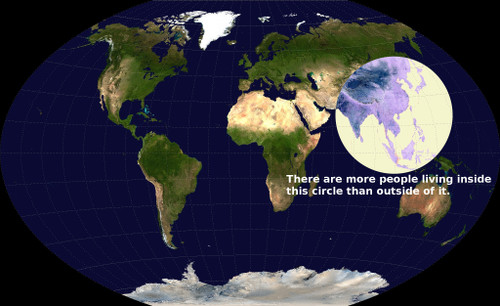 The Growth Circle
(by Kenneth Myers at http://techno-anthropology.blogspot.com/2013/05/the-valeriepieris-circle.html)

The area in the circle may be bubbling with people, but it’s also under-screened, a happy combination for cinema equipment companies. It’s estimated that up to 50% of cinema equipment sales over the next 5 years will be generated within the circle. As it turns out, those players with the strongest positions in this region, Qube and GDC, are not the most popular in the US. Doremi, having the largest worldwide market share of any media block and server company, has not been able to duplicate its success in the Indian/Asian market. Among projector companies, Barco has played its cards well with both Qube and GDC, following its partnership strategy which has produced excellent results around the world. Christie, on the other hand, is now more intent on selling its own IMB than that of GDC and Qube, causing it to walk a solo path in sales. Without an adjustment in strategy from Christie, and without a successful path to sales in China for Doremi, we could see a power shift among digital cinema manufacturers in the coming years.

3D is a market where a power shift is likely to occur, particularly in the US. Two years ago, stock market analyst Rich Greenfield of BTIG wrote a post at http://t.co/55bVxAUo nailing RealD to the wall for its failings. His post could have been written today without losing relevance. The fact that so little has changed for RealD in the past 2 years may not necessarily predict its next 2 years, but there are those betting on it. Its stock is only marginally higher at the close of 2013 than at the close of 2011, and it’s now facing new competition. RealD’s patented technologies in the US are not patented everywhere in the world. At least a half dozen light doublers were spotted on the trade show floor at CineAsia this month, and several such products are also marketed in Europe. Competitor MasterImage says it can match if not better RealD’s doubler performance in the US, without patent infringement. Severtson, Harkness, and MDI each have developed advanced screen technologies of their own, at better prices and, in some cases, similar performance to that introduced by RealD. RealD’s licensing model provides the revenue stream that props its market value, but at a premium cost to exhibitors that competition renders impossible to justify. RealD contracts are beginning to come up for renewal, which will sharpen its competition in 2014.

Further innovations for cinema are unlikely to receive a push in 2014. If Peter Jackson did anything with Hobbit, it was demonstrate that higher frame rates do not translate into higher box office. The Academy of Motion Picture Arts and Sciences is conducting a private investigation into the future of cinema technology, not only considering the value of shooting at a higher frame rate, but also the value of higher dynamic range, higher light level, and a larger color gamut. The effort could shine a light on how to apply new technologies in compelling ways, and in turn, encourage technology development accordingly. But while such efforts are useful to guide future technology development, there has to be an economic reason if the motion picture industry is to follow in a widespread manner. Having said that, the one innovation that cinema would seem ripe for is a new branded experience that cuts across cinema circuits. New technologies on their own are difficult to sell, but when associated with a branded experience, they should be much easier to monetize. IMAX offers the best example today, but there’s always room for competition, and that door remains open as we go into 2014.

An area where the industry would benefit significantly is in distribution, through better tools for efficient key management and content version management. While distributors continue to complain about the number of versions of content that they must manage, the number is only destined to grow as new technologies get added to the list. A lot of attention was paid in 2013 to DCDC and satellite distribution, a useful model for bringing capital to the problem. But any efficiency gained in key management and content management is localized to the DCDC network. The cost of inefficient key and version management in the other 87% of screens around the world still needs to be addressed, and finding the capital for that will not be easy. While new standards in this area would be useful to move solutions beyond the proprietary stage and into wider use, it would take a consortium of studios to drive it, and that level of effort appears to be a thing of the past. When it comes to key management and content version management, 2014 will lead to the same complaints, with the same results.