The annual Consumer Electronics Show (CES) held in Las Vegas each year is the archetype of innovation by committee. Apple has never shown at it, and Microsoft bailed a few years ago, leaving the show floor to the stalwart consumer electronics manufacturers who probably fund their corporate spy networks as generously as their R&D departments. In 2008, the show was flooded with 3D televisions, and continued with that theme for several years. This year, the new wave was 4K and 8K Ultra High Definition, also known as Ultra HD, or simply UHD.

4K for television is not exactly the same as 4K for cinema, in “good” ways and “bad”. 4K UHD has a raster of 3840 pixels wide by 2160 pixels tall, while cinema 4K has a raster of 4096 x 2160 pixels. (Those extra 156 lines of pixels probably do not give exhibitors a strong feeling of differentiation.) But while 4K UHD may have slightly less pixels than its cinema counterpart, it has more color, thanks to ITU–R Recommendation BT.2020, more commonly known as Rec 2020. To illustrate the difference in color gamut between DCI P3 and Rec 2020, observe the graphics below, courtesy of Noteloop.com: 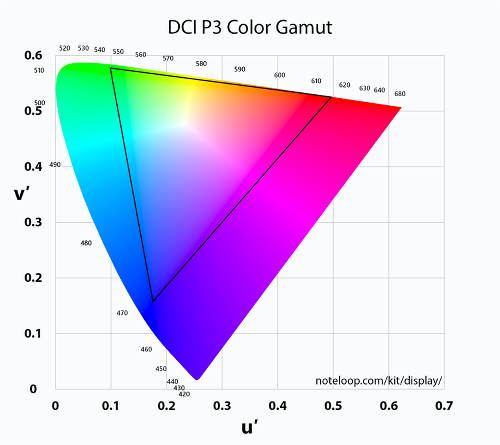 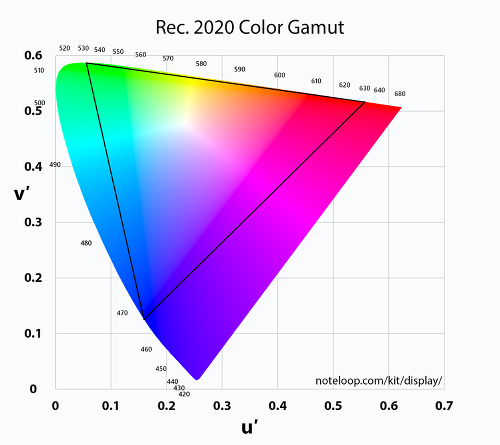 A Rec 2020 display should look stunning. But there were no Rec 2020 displays at CES. Buyer beware: the UHD logo can be applied to a display without meeting Rec 2020. At CES, only Vizio came close to displaying Rec 2020 on its reference monitor, even then stating that it could only produce 80% of the colors possible. Color and contrast having more to do with picture quality than resolution, one manufacturer, Sharp, took a different course. Sharp’s Quattron display uses four color primaries, rather than the usual three. Identical content observed on both a 4 primary HD screen and a 3 primary 4K UHD screen showed a much richer set of yellows with the 4 primary screen, without Rec 2020. The display being native 2K, the four color pixel array also was cleverly driven to provide a quasi-4K resolution. The result was impressive in both color and detail, demonstrating that color and cleverness can do more for picture quality than resolution.

This discussion serves as a good backdrop for “Dolby Vision,” which was introduced at CES as a higher contrast, higher luminance, higher color gamut alternative to regular ol’ displays. Dolby says the brightness can be up to 40 times that of normal displays, and it uses a color space similar but apparently not the same as Rec 2020. Dolby Vision requires specially mastered content, and while there was some of this at CES, the displays seen on the trade show floor that claimed to be implementations of Dolby Vision weren’t at all impressive. Vizio was said to have the best looking display using Dolby Vision, but was tucked away in a hotel, viewable by appointment only. Demonstrations aside, few can argue with the idea of higher contrast, luminance, and color, and Dolby chose this show to tip its hat as to its next step in the field of entertainment.

Circling back to cinema: Laser illumination, up to now, has been marketed as a replacement technology for Xenon lamps. More creative types look at it as an opportunity to move cinema into pictures having higher contrast, luminance, and color gamut. Having said that, Dolby announced in a recent meeting of the ASC Laser Illumination group that it will open up demonstrations of its prototype laser projector, which, no surprise, displays higher contrast, luminance, and color gamut. Dolby further stated that it intends to install its projector in a small number of sites within a year. Up until this meeting, the projector was demonstrated only under non-disclosure agreement. Let’s hope they give it a name that’s cleverer than Dolby Vision.