According to numbers shared by Technicolor, the number of digital cinema installations worldwide grew to 116,000 screens in 2013, up 25,000 from the prior year’s (final) total of 88,000 screens. Of that 25,000, approximately 5000 were new construction. The worldwide count of cinema screens (digital or not) is now 135,000, including newly built screens and e-cinema screens in India.

As screen conversions complete, new screen construction is predicted to fall substantially by 40% by 2015, to about 3000 screens annually. These numbers do not take into account the attrition to take place once film distribution comes to an end. If we estimate 5% attrition due to lack of conversion of older and not-so-profitable screens, 6,750 screens could disappear practically overnight. That would leave some 12,000 screens that actually remain to be converted, not counting new construction in future years.

Our prediction a year ago was that sales would begin to decline in 2013. New construction, however, boosted those sales to make up. But sales in 2014 will not be as robust as in 2013, and sales in 2015 will be even less so. By this model, sales by 2016 will be limited to new construction, which could range anywhere from 3,000 to 6,000 screens per year. These numbers are considerably smaller than the peak sales enjoyed in 2011 of about 30,000 screens.

The charts below illustrate regional growth of digital cinema screens, as well as remaining screens by region to be converted. 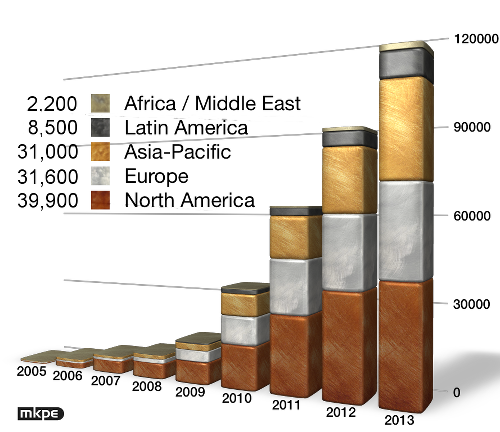 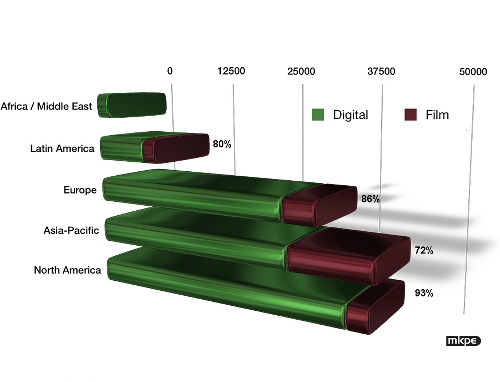