Every digital cinema projector manufacturer but Sony demonstrated a laser-illuminated projector at CinemaCon, and surely Sony is not far behind. One would think that the regulatory agencies had lifted bans on such products in cinemas. While its evident that a lot of investment is moving into the creation of this technology, not all companies share the same strategies. We’ll take a closer look.

There remain regulatory issues in much of the world for installing a laser projector in a publicly accessible space. One strategy for dealing with this is to produce a laser projector that is affordable and installable under current regulations. This is NEC’s approach. NEC will soon introduce a laser projector it says will sell for under $50,000 in the US, and can be installed under current regulations. To achieve this, NEC chose to match the specifications of Xenon projectors, rather than push for more light, color and contrast. To meet cost objectives, the NEC laser projector has a single laser which generates its primary colors using phosphors. The color spectrum of the phosphors is broader than that of a laser, eliminating speckle and metamerism issues, and further reducing the cost of the projector. The NEC laser projector is specified for no wider a screen than 11 meters (36 feet).

Christie and Barco are taking a different approach from NEC, and instead introducing the most powerful product they can, intended for the largest auditoriums. It’s a “build it for when the regulations go away” strategy, not to mention that these products are also for the exhibitor for whom cost is less important than quality. Both companies displayed 6 primary projectors, optimized for Dolby’s spectrally filtered 3D glasses. Christie’s demonstration was functional, but effective, demonstrating the color, contrast, light power, and 3D quality possible with 6p laser illumination.

An explanation is needed as to why 6 primaries for 3D. Some sales people erroneously state that 6p 3D is 90% efficient. In fact, the maximum efficiency possible for 3D is 50%, as by nature of stereoscopy, only one eye sees the image at a time. Said differently, with 3D, at best, 50% of the light goes to one eye, and the other 50% goes to the other eye. What the enthusiastic sales people are really trying to say is that they believe they have achieved 45% 3D efficiency (90% x 50%). The reason 6p laser is more efficient with Dolby 3D than with Xenon is that three primaries are selected to match Dolby’s filters for one eye, and the other three primaries are selected to match Dolby’s filters for the other eye. As such, the vast majority of the light produced by the 6p laser projector reaches our eyes in 3D. Not so with Xenon, where a filter at the projector must throw away much of the white light produced to limit the spectrum to the 6 primaries needed for Dolby 3D.

In spite of the other demonstrations, there is no doubt that Barco stole the show with its CinemaBarco concept. But Barco chose to impress more by its out-of-the-box thinking than by the quality of its laser projector. Rather than proclaim bragging rights about its laser projector, Barco took a different approach, illustrating new ways to better entertain audiences, in which its laser projector plays a role. The CinemaBarco concept began in the themed lobby, where numerous video displays and a non-laser projector were driven synchronously by a digital signage controller. In the auditorium, Barco’s laser projector shown on the central screen of a 3-screen Cinerama-esque presentation, titled “Escape,” as illustrated in the figure below. The concept of immersing the audience with images is certainly not new, but rare to experience, and nonetheless impressive. The demonstration was effective in showing what can be done in the cinema if willing to expand the concept of digital projection. In terms of demonstrating Barco’s laser strengths, however, the demonstration was weak. It’s 6p Dolby 3D was good. But the laser projector was toned down to match the colors of the Xenon-driven projectors for the side screens, operating at only 30% of its potential light level in a Cinemark XD auditorium. 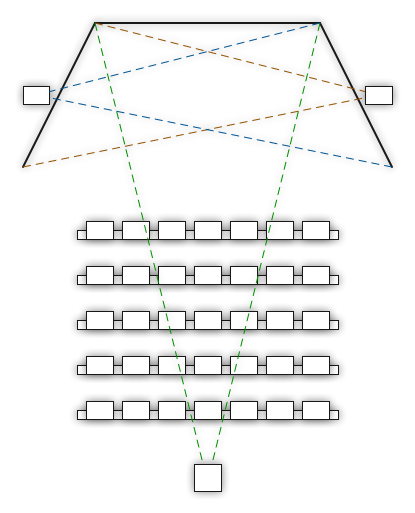 Barco bent over backwards to produce its CinemaBarco demonstration, and deserves big kudos for doing so. Bringing theme park concepts into the cinema is a good idea. But movies must move downstream from the cinema into the hands of consumers to justify large production budgets. The three projector demonstration was stunning, but unlikely to become mainstream.

What was not displayed at CinemaCon was a laser projector approaching the HDR and wider color gamut capabilities of Dolby Vision, as seen at CES on pumped up consumer displays earlier this year. Bringing a new experience into the home is no easy matter, and requires the support of both the motion picture industry and the consumer electronics industry. The support at CES for Dolby Vision, however modest, was a beginning. The next step is to learn if the motion picture industry is willing to move in this direction. To that effect, the Academy of Motion Picture Arts and Sciences just conducted an exploratory shoot of test material to examine the technical issues surrounding HDR and wide color gamut, as well as the story-telling values. This is an effort to watch.