Hollywood’s interest in 14 ft-L 3D is growing. The promise of brighter 3D through laser projection – or the “almost” promise as reported last month – has fueled higher expectations in the industry. It would seem useful to explore what is feasible, if only to understand if industry expectations are within reach. Along that path, several questions come to mind: How efficient must a 3D system be to encourage brighter 3D operation? Is there a sweet spot for higher luminance levels? What would be the cost to exhibition?

The big buzz in the industry is laser projection. Today, laser projection is expensive. Some say it will be cheaper in the future, but that remains to be seen. Semiconductor technologies (laser diodes are semiconductors) become cheap when fabricated in the millions. Manufacturers say they will be lucky to sell laser projectors in the hundreds. That’s because laser projectors are said to cost in the US$8-$10 per lumen range. Based on that estimate, a 60,000 lumen projector would cost at least US$480,000. Not a small price tag, by anyone’s measure.

And what will 60,000 lumens buy? A comparison of 3D performance with laser-illuminated and xenon-illuminated projection systems is offered. For the comparison, a 20 meter screen (66 foot) is used. 20m is smaller than the typical PLF (premium large format) sized screen, but still a large screen. To normalize comparisons, screen gain is fixed at 1.7. This is slightly less than the typical 1.8 gain screen in 2D cinemas, but representative of some of the very high quality “polarization preserving” screens now available for polarized 3D. Following the footsteps of others, it is assumed that the optical path is 97% efficient, independent of the 3D system. It is also assumed that the light source is set to 85% of full value, for a realistic result.

In calculating actual light on screen using a laser projector, a 42% 3D efficiency using spectral filtered glasses is assumed, again using numbers of others. This figure is compared with a popular polarized 3D system, whose advertised efficiency is 28%. Applying all of the assumptions listed above, the laser-illuminated projector will deliver a 3D light level of approximately 15 ft-L, significantly better than the target 14 ft-L. If using two 30,000 lumen xenon projectors with the popular “light-doubler” polarized 3D technology, the 3D luminance level is 10 ft-L, or 1/3 less than the laser projector.

The point to examine is whether the lower 3D luminance from a xenon-illuminated projector is offset by its lower cost. To achieve 60,000 lumens from a xenon lamp-illuminated projector requires two projectors. Assume the projectors cost $55,000 each, totaling $110,000. Add to this an estimated $30,000 each for the light doubler. (The popular product in this class is leased, but there will be similar ones on the market one day.) Altogether, the cost for 60,000 lumens with 3D system is $170,000. That’s cheaper than a laser projector, but it’s not capable of 14 ft-L 3D. However, if we were to normalize these costs, diving them by the available 3D lumens, (where “available 3D lumens” is arrived at by subtracting all of the losses in the light path due to 3D inefficiency and optics, including less than maximum power operation of the light source), the polarized system costs about $12 per 3D lumen, while the laser projector costs $23 per 3D lumen. In short, while the xenon/polarized solution achieves 67% of the 3D light level, it does so for about 50% less per lumen. This makes xenon-illumination something of a bargain.

Digging deeper into the bargain path, it’s possible that a more efficient 3D technology emerges for xenon-illuminated projectors. What if, say, this new technology contributes an additional 5% of efficiency, increasing efficiency from 28% to 33%?

To best understand how the technologies compare, a few charts were prepared. All of the assumptions above were entered into a spreadsheet, and graphs plotted for various screen sizes. The results are below. The first chart assumes a 1.7 gain screen used with both laser and xenon systems. The second chart assume a 1.7 gain screen for the laser projector with spectral 3D, but a 2.2. gain screen for the xenon/polarized 3D system. In both graphs, the estimated cost of the system is assigned to each curve. The results are quite interesting. The first chart shows that the added 5% of efficiency in the polarized 3D system makes a significant impact in closing the gap between existing polarization technology and the laser system. The second chart shows that the additional 5% of efficiency, coupled with a 2.2 gain screen, matches the performance of a laser system, with a substantial savings in cost. In all cases, all polarized systems cost substantially less than the laser system. In making this point, the long term cost of leasing 3D technology was not taken into account. 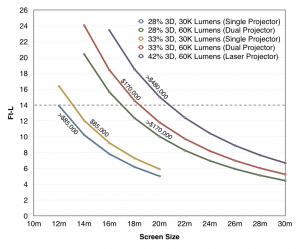 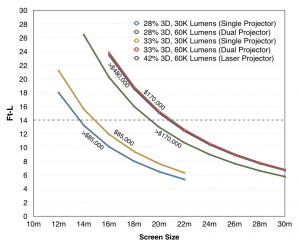 There remains to be examined the question of whether 14 ft-L is a realistic target for 3D. Certainly, there’s an argument to be made that if one is going to spend gobs of money on a laser projection system, that they should set their goal for 14 ft-L 3D. But if laser projectors comprise only a small number of cinemas, then we should take a closer look at what will work for everyone else.

This exercise delivers three messages worthy of deeper study: 1) It may be worth the wait for better xenon-based 3D technology to emerge, 2) laser projection will need to deliver more than just brighter 3D to prove its value, 3) with current technology, it’s more feasible for the industry to pursue a wide footprint of brighter 3D in the 6-10 ft-L range than it is to pursue 14 ft-L.