Laser projectors were hot topics at both IBC and KinoExpo this month. The highlight of IBC was Doug Trumbull’s screening of UFOTOG in 120 fps per eye and 14 ft-L 3D. (Image quality and 3D comfort level were stunning!) The two trade shows provided an opportunity to learn more about the design approaches taken by Barco, Christie, and NEC laser projectors. This is the first innovation in projection technology where Texas Instruments has taken a back seat, resulting in each of its licensees taking a different path. This report “shines more light” on the subject, with a surprising result: 7 ft-L 3D can now be achieved on a wide scale with multiple technologies.

Laser projector require design tradeoffs. These tradeoffs are somewhat moderated by the fact that only one laser manufacturer, Necsel, is producing the lasers used by Christie, Barco, and IMAX. There are only a few primary frequencies to choose from with Necsel, and the choices are engineered for 6-primary 3D. NEC, notably is using Mitsubishi lasers. However, NEC approaches laser projection differently from the other three companies, which likely imposes a lesser challenge to Mitsubishi. When designing a laser projector, one trades off overall efficiency, one head vs two head operation, choices that could improve speckle, improved color matching against xenon, and the mitigation of metameric failure.

Barco and Christie laser projectors target the high brightness market. Each company offers a 6 primary laser projector, based on Necsel lasers. 6-primary projection is geared for 3D, where 3 primaries are directed to one eye, and the other 3 primaries to the other eye, requiring special versions of Dolby 3D glasses for the audience. However, the choice of primaries employed for left eye and right eye are different for each make of projector, meaning that they cannot share glasses, despite the fact that both use Necsel lasers. NEC is the one company not using Necsel lasers. NEC targets the value market by reducing cost of ownership for small to mid-size screens, and not high brightness levels. NEC laser projectors are not positioned for the high brightness 3D market. At least not yet.

Barco’s 6-primary laser projector produces 60,000 lumens in 2D mode. But it only produces 30,000 lumens in 3D mode, a fact that may be difficult to pull out of the specifications. Barco tips its hat when saying that its laser projector is only 22% efficient with Dolby 3D glasses. The 22% is measured against an assumed 60,000 lumens. However, the actual amount of light per eye is 30,000 lumens. When measured against 30,000 lumens, Barco’s 3D efficiency is identical to Christie’s stated efficiency of approximately 44%. (The reason for using Dolby 3D glasses with 6-primaries is the high 3D efficiency that results.)

There are strong points about Barco’s design that should not be overlooked. All 6 laser primaries are active in both 2D and 3D modes. In 2D mode, the use of 6 laser primaries should improve color matching with xenon, and reduce the visibility of both speckle and metameric failure. Barco may have only 1/2 the lumens available for 3D as Christie, but its 3D requires only one projector head, eliminating stereoscopic alignment errors.

Christie’s laser projector can deliver 72,000 lumens and upwards. Notably, Christie’s 6-primary design employs two projector heads (versus Barco’s one), 3 primaries per projector, with each projector head delivering 72,000 lumens. For 3D, Christie displays left/right images simultaneously, not sequentially as with Barco, delivering the full 72,000 lumens in 3D mode. Christie’s design approach leads to the brightest possible 3D picture, and is the reason the company touts 14 ft-L 3D. However, because two projectors are required, periodic alignment is necessary for both 2D and 3D. Christie says it achieves 42%-46% efficiency with its version of Dolby 3D glasses. Where Christie differs from Barco is that Christie only uses one projector head in 2D mode. This reduces the number of primaries in 2D mode to 3 primaries, which one would expect to increase 2D color-matching issues with xenon as well as increase metameric failure in 2D over the Barco design.

Power savings by using a laser projector varies considerably among manufacturers. Christie claims no power savings. Barco and NEC claim around 40% power savings in 2D mode. Barco does not disclose power savings in 3D mode, and NEC, which doesn’t offer a 6-primary projector, doesn’t have a 3D mode different from its 2D mode.

Projector cost varies, as well. Christie says its laser projector runs around $8-$10 per lumen. Presumably the 72K lumen configuration is $10/lumen, or around $720,000, with higher power configurations bringing down the cost per lumen. Barco has not been as public about the cost of its projector, but has been known to say it will sell for around $5 per lumen, or approximately $300,000.

At IBC, Christie’s laser projector was used with a 1.0 gain screen to show movies in 14 ft-L 3D (including Trumbull’s UFOTOG). Barco specs its projector with a 1.8x gain screen, as it does with all of its projectors. Screen gain has an obvious effect on screen size, and the different specifications can make it difficult to compare projectors. The graphs below should help. The first graph compares the 3D light level for both Barco and Christie on 1.0 gain screens. Adding gain to the screen will move both curves to the right, enabling larger screens. 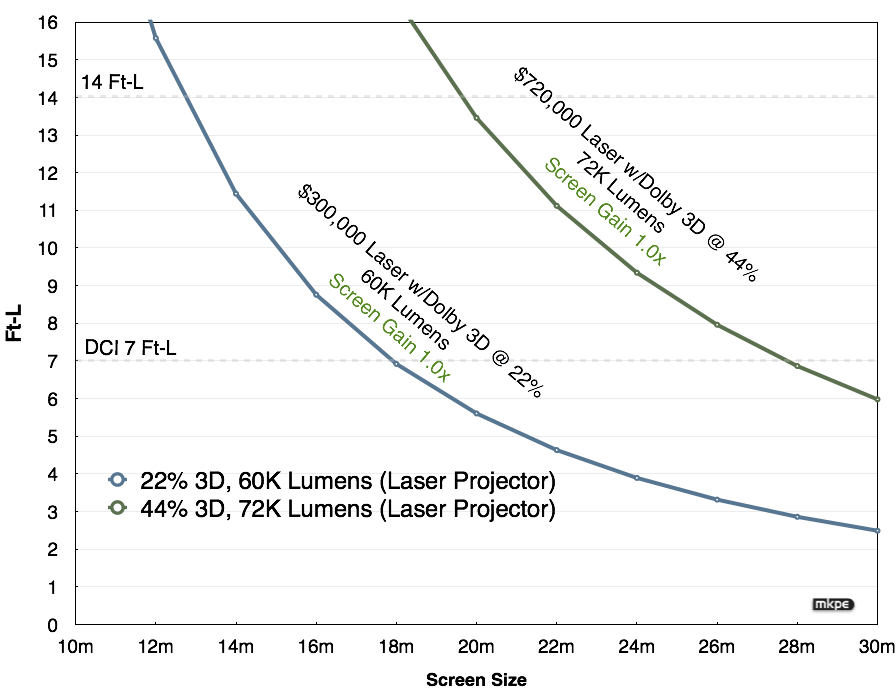 The second chart (below) compares Barco and Christie laser projectors in 3D mode on a 1.7x gain screen (such as the Harkness Claris screen, one of a new generation of wide angle silver screens) with a polarized light doubler solution having 33% efficiency. Not all things are apples-to-apples in this comparison, as the stereo separation possible with Dolby 3D glasses and 6-primary laser projection is higher than that possible with polarization, by a factor as much as 10x. Proponents for Dolby 3D point out that higher stereo separation can result in more pleasing 3D images for the audience, but there are negative factors associated with this technology that lead to audience dissatisfaction, which are not necessary to delve into here. 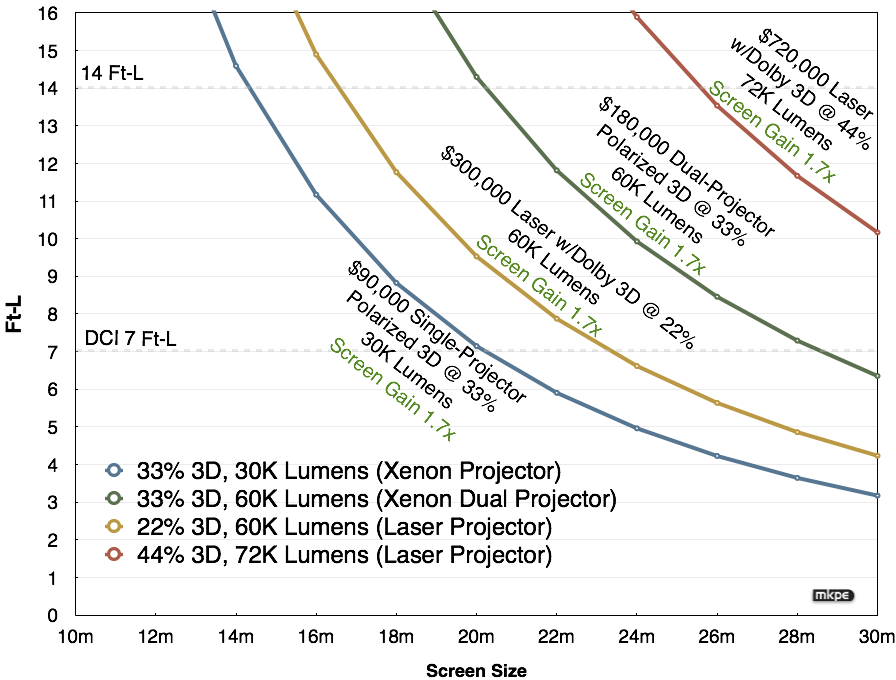 One of the messages of this analysis is that the 7 ft-L light level for 3D recommended by DCI is achievable on a wide scale, with or without laser projectors. High efficiency polarized 3D systems are now available from multiple sources, and laser projectors cover the bases for both 7 ft-L 3D up to 14 ft-L 3D.

In summary, each laser projector targets a different market. Christie, touting 14 ft-L 3D on large screens, is targeting the PLF market with its laser projector, a market in which it has no competition. Barco is targeting the more mainstream market, unapologetically claiming that 7 ft-L is good enough for 3D. However, its claim invites comparison with other efficient 3D technologies that can also produce 7 ft-L 3D. This is I show the comparison graph above, where the competing technology can save 40%. NEC is targeting the 5000 lumen market today with low cost-of-ownership over the lifetime of the projector. This places NEC laser projectors in a very different market, and is why I’m not giving NEC the same attention as Barco and Christie in this report. The good news, however, for 3D, is that 7 ft-L 3D is now achievable on a wide scale with competitive products and technologies. This is the news that exhibitors should be exploring today.