The intent to regulate internet providers in the US sparked no end of debate.  Much of that debate obfuscated the underlying issues, to the point of inspiring over-the-top statements on both sides.  Ultimately, net neutrality in the US will establish a foundation for growth of streamed entertainment to the home, which makes it of interest to exhibitors.

The battle over net neutrality is best explained through analogy.  Imagine starting a storefront business selling magazines.  You build out an infrastructure of stores, and your business flourishes.  The government may have a mild interest in your business because you rely on certain resources that the government oversees, but in the end, you’re just selling magazines, nothing that makes you the center of a national debate.  Then a new innovation emerges that allows you to establish virtual storefronts for others in your stores.  At first, those virtual storefronts are filled with frustrated writers creating blogs that your customers like to read.  Nothing that threatens your core magazine business, and it brings in some extra revenue.  Then startups come along to use your virtual storefronts, with scrappy names like Google, Facebook, and Netflix.  Your customers like them.  Their businesses grow bigger than yours.  Not only that, but as they grow, they start to compete with your magazine business, as you both target customer leisure time.  And they do this while relying on the infrastructure you built.  So you look for ways to monetize this new situation, fully aware that your original business model of selling magazines is slowly being disrupted.  Your actions get the attention of the government, who is more interested in the growth and value of the users of your infrastructure than the fact that your business is being disrupted.  (Your Kodak moment.)  Eventually the government steps in to regulate your infrastructure.  Your reaction, naturally, is to scream bloody murder.  After all, you’re in business to sell magazines and you want to monetize the fact that these other companies are piggybacking on you.  But your infrastructure has become more valuable to the economy than your business.  And here you are.  Your magazine business is turning into a next-generation Ma Bell.

The good news is that the cable TV companies still have a business.  After all, most businesses that faced disruption are now extinct.

The story behind net neutrality in the US is the ongoing disruption of its cable TV industry.  Notably, the Hollywood community has been quiet about it.  <i>Variety</i> reports that many entertainment executives privately say they’d rather have the government not involved.  There are conflicts in Hollywood.  Comcast, a cable company, now owns Universal Studios.  But also, why would studios cheer the growth of streamed entertainment?  Studios make money from sales of physical media, such as DVD and Blu-ray discs, sales which have dropped in favor in Internet streaming and rental.  (The first-sale doctrine in the US does not allow studios to make money from rentals.)  Studios also make money licensing content to cable companies.  While streaming isn’t covered by the first sale doctrine, it doesn’t earn the money that physical media generates, either.  Anything that helps streaming grow doesn’t help revenue.  In addition to this, Amazon and Netflix recently announced plans to make theatrical films, further encroaching into the territory of major studios.

How quickly is this disruption taking place?  Sandvine has been tracking Internet usage for years, published in its online reports (search for “internet” on the http://sandvine.com website).  The chart below, taken from Sandvine’s 2014 H1 report, illustrates that content streaming drives the lion share of Internet usage, even if only comprising 15% of Internet subscribers, as the report states.

The above chart was the first of its kind produced by Sandvine, so a history is not available.  But Sandvine’s projections, taken from its 2013 H1 report, fills in the gaps. 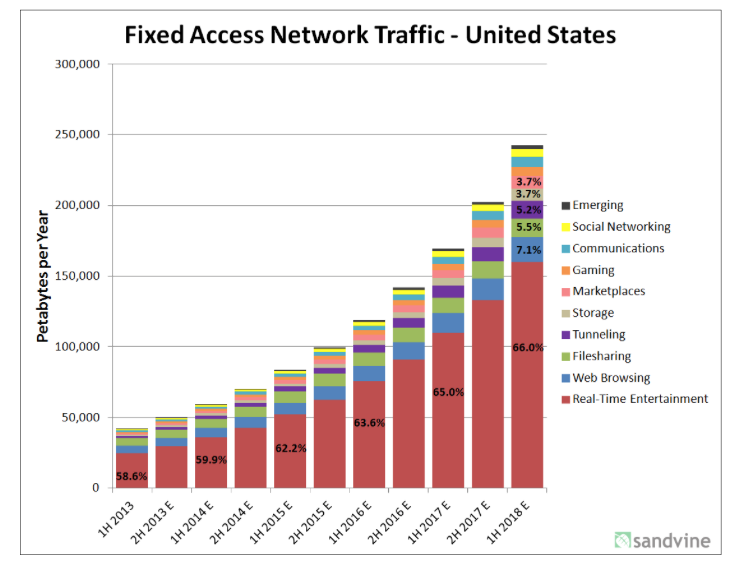 The projection shows all forms of Internet usage growing somewhat uniformly.  Sandvine does not state this, but one should assume that the projections do not assume an increase in bandwidth to view a movie, as would be the case for a 4K movie.  That could drive the Real Time Entertainment bar proportionally higher.

The impact to exhibition is different than that for major Hollywood studios.  Exhibitors already face an onslaught of competition for eyeballs.  The trends outlined above illustrate a shift in how competition for those eyeballs manifests itself, rather than dictate an increase in competition.

The good news for exhibitors is that Netflix, Amazon, and iTunes are more popular for their ability to deliver content cheaply with good-enough picture quality than they are admired for an ability to deliver stunningly beautiful pictures.  For that, disc triumphs.  The consumer behavior for streaming mirrors consumer satisfaction with MP3 music recordings, which continues to baffle audiophiles.  It lends to the argument that there will continue to be room for cinemas to differentiate from home entertainment through quality of experience, starting with the big screen, even as screen size grows in the home.

For those who aren’t convinced that the end of the Internet will not result from the FCC’s latest action to regulate it, you might take a look at a review in the New York Times of a similar law passed in the Netherlands two years ago.  Note in the interviews that happy users judge their Internet service by the content they watch.  C’est la vie cable TV companies, bonjour Internet providers.

MKPE is a world-class consultancy, building business at the crossroads of cinema and technology.
Learn more about us.