Dolby and IMAX debuted their laser projectors in the US this month, underscoring the industry’s passion for projecting beautiful images on a large screen. IMAX installed its new laser projector at the TCL Chinese Theatre in Los Angeles, inaugurated with the movie Furious 7. Dolby debuted its Dolby Vision projector at CinemaCon, in the Caesar’s Palace Colosseum with the Pixar movie Inside Out. There are differences in the experience that each of these formats delivers. This report reviews what one should expect.

In its goal to provide a quality experience, IMAX took the direction of matching the quality of presentation possible with its famous 15 perf/70 mm film format on a massive screen. The screen at the TCL Chinese Theatre, for example, is 92 feet wide and about 60 feet tall. Since 2000, all IMAX cinemas have been designed to deliver peak luminance levels of 22 ft-L, 60% brighter than in standard cinemas, and matched by the new IMAX laser projector. The IMAX laser projector is 4K DLP-based, but does not use the optical prism assembly developed by TI, as found in all other DLP-based projectors. Instead, IMAX uses the optical assembly originally developed by Kodak, the early version of which is pictured below. The IMAX optics significantly improve contrast over standard DLP Cinema projectors, achieving a 10,000:1 ratio. For comparison, standard DLP Cinema projectors are limited to 2000:1 contrast. Intra-frame contrast with the IMAX projector is very high, showing no bleed among adjacent whites and blacks. The projector utilizes two heads, and can deliver 6-primary 3D, producing approximately 10 ft-L images at the eye in 3D. IMAX developed the projector, utilizing a laser illumination system built by Barco. 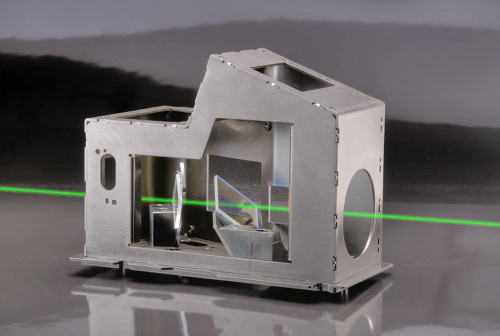 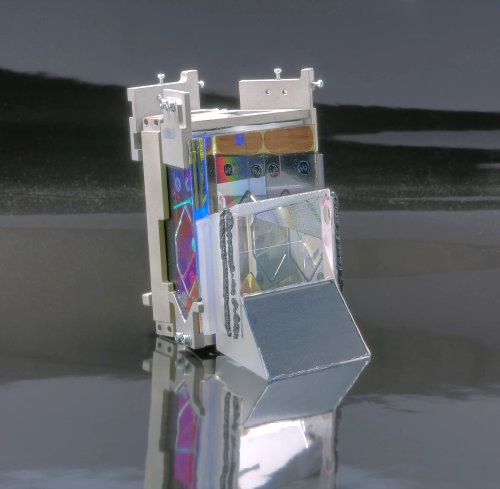 The Dolby Vision projector is designed to deliver high dynamic range (HDR) pictures. While it is capable of peak luminance levels significantly higher than standard 14 ft-L, the most notable achievement is the detail that can be seen in the blacks. When the Dolby Vision projector delivers a solid black image to the screen, it is solid black. There are no traces of light, and no grayish appearance of the screen. Dolby claims a stunning contrast ratio of 1,000,000:1. The Dolby projector is built by Christie, with Dolby proprietary modifications (for HDR), utilizing two projection heads and 6 primaries for 3D. Not confirmed, it is possible that Dolby will trade a reduction in dynamic range to produce 14 ft-L 3D.

To help explain the difference in formats, the graphic below provides an empirical comparison of the dynamic range possible with Dolby, IMAX, and standard cinema projectors. 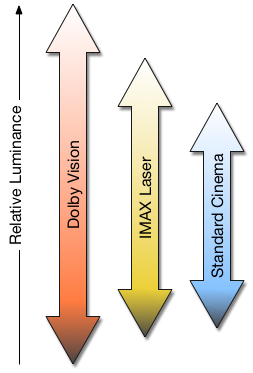 In summary, IMAX is focused on mirroring its 15/70 format (the finest image format available in film) with its new laser projector, while Dolby is focused on delivering something new to audiences in the form of laser-illuminated HDR. The IMAX brand is generally associated with giant screens, but Dolby will likely settle for less-than-giant-sized screens in Dolby Cinema. IMAX uses the light power of its projector to deliver 22 ft-L across the screen, while Dolby appears happy to delivery 14 ft-L to a smaller screen, applying the excess light power to the brighter highlights associated with HDR imagery. Dolby can deliver impressive details in the blacks, which is an area where the IMAX projector has some limitations. Both deliver impressive intraframe contrast. Each format requires tight control of the auditorium design. In addition, the two formats utilize the unique sound systems offered by each. (IMAX has a new 12-channel sound format, while Dolby Cinema employs Atmos.)

Of the two formats, the one most likely to tantalize the story-telling imagination of the creative community is Dolby Vision. At CinemaCon, the colorist and Director of Photography for Pixar’s Inside Out were obviously intrigued with their newfound ability to enhance the appearance of the movie’s imaginary scenes, which played out well in the performance. Special effects can benefit. A clip of Tomorrowland portrayed a large ring having an unearthly glow, possible only with HDR. How memorable these images will be with the audience remains to be seen. But there’s a lot of money betting that they will.

Differences aside, the real beneficiary of these formats is the cinema industry at large. By making cinema special, new moviegoers will be attracted to experience the entertainment medium. If that attraction extends to the Millennial generation, then all the better. Kudos to IMAX and Dolby.