“Given the increased light level capabilities of 3D RGB laser illuminated projectors and multi-projector installations, peak white luminance for such projection systems should be 48 cd/m2 ± 6.9 cd/m2 (14 fL ± 2 fL) measured at the center of the screen through all filters and lenses, i.e., light level to the eye.”

High brightness 3D has been on the American Society of Cinematographer’ (ASC’s) agenda for a long time, and the statement from DCI was enthusiastically received in creative circles. With serendipitous timing, Barco also demonstrated its 6P laser projector this month at the Director’s Guild of America (DGA), presenting to the creative community how beautiful 3D at full brightness can be. For those who think 3D is waning, think again. Nothing stirs the creative community more than alluring images, and the sight of well-known photography from critically acclaimed movies in full brightness 3D gave DCI’s virtual stock a boost.

While there is always concern that DCI’s recommendations have no teeth and could be ignored if faced with strong opposition, it appears DCI is getting traction beyond the creative community. An insider report says the announcement was cause for numerous calls to members, presumably from exhibitors. Regardless of any controversy that may have been kicked up, at least it shows that the industry is listening. 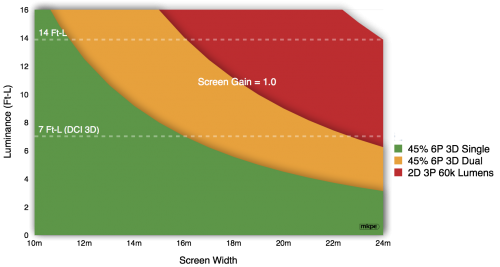 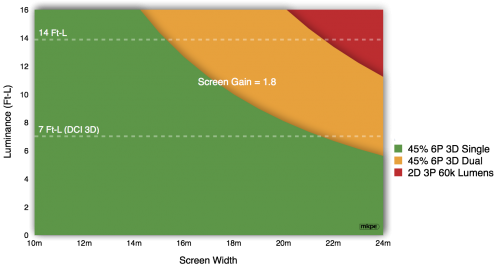 The graphs show that a two-head 60K lumen 6P laser projector on a flat 1.0 gain screen can barely achieve 14 ft-L 3D with a screen 16 meters (53 feet) wide. Practical systems require a gain screen, as shown in the lower graph of the same projectors on a 1.8 gain screen.

Once the requirement for a screen with gain is known, then other options open up. Dual projector polarized 3D solutions are also available. If you’re in the position to evaluate solutions, be sure to compare long term cost of ownership. Laser projectors may save on power consumption, but such details would have to be discussed with the projector companies.

DCI is to be applauded for taking the step to promote high brightness 3D. Exhibitors may find such a step wishful on their part, due to the financial requirements of the technology. But to appreciate why DCI would take this step, it’s worth watching a movie at full brightness 3D. Recent trade shows have been highlighting the value of it, and no doubt will continue to do so now that high brightness 3D has been given a formal stamp of approval.