In the 90’s, a handful of digital audio on-film and with-film technologies emerged, all capable of reproducing 5.1 sound. The surprising part is that, regardless of the fact that they all used the same amps and speakers, at least three non-interoperable methods of distributing sound tracks proliferated. For sound mixers, this didn’t pose a problem, as they each could carry the same 5.1 mix. However, distributors and exhibitors weren’t really keen on the multiple distribution idea, and so digital cinema was designed to eliminate the multiplicity of distribution methods for 5.1 sound. Human ingenuity, however, perseveres, and today we are back to having multiple ways to distribute similar, although this time not perfectly identical, soundfields. We can mostly thank the innovators of immersive sound formats for this.

I say “mostly” as the industry did manage to complicate 5.1 distribution in digital cinema, although the effects have not been felt yet. Interop DCP got 5.1 sound right. ISDCF deserves credit for this through a series of recommendations, the latest of which can be found at http://isdcf.com/papers/ISDCF-Doc4-Interop-audio-channel-recommendations.pdf. But SMPTE DCP failed by standardizing two non-backwards-compatible methods for packaging 5.1 audio. Even Dolby found this to be unreliable and so added a third ad-hoc method that’s used in the SMPTE DCP distributions of Atmos soundtracks.

It is immersive sound, however, that deserves more attention. While 5.1 distribution methods may vary, the 5.1 mix itself remains the same. This isn’t necessarily the case for immersive sound, where each format uses a different speaker layout. In an attempt to manage such differences, the SMPTE group working on immersive sound for cinema is generating a set of metadata requirements for describing how sound objects are to be rendered. By applying this metadata in a standardized bit stream, an interoperable immersive format can be defined.

Even if the three sound formats shared a common distribution format, there remains the issue of different speaker layouts. Unlike 5.1 audio, three immersive sound formats could easily require three different mixes in post production to achieve a uniform soundfield response. There is already effort underway by a few of the technology providers to derive suitable mixes for their formats from the mixes of others. If so, this would support the feasibility of an interoperable mix. Given the commercial constraints of established and proprietary mixing tools in post production, the smartest application for a standardized immersive sound format would be as a mezzanine format exported and imported by proprietary mixing tools.

The means for interchange of mixes among proprietary mixing tools may not eliminate the pain of multiple distributions, but it would eliminate or at least reduce the pain of multiple mixes in post production, placing immersive sound on the same footing as 5.1 sound in the 90’s. Stepping back 20 years might not seem like a step forward, but after all, we’re on the wheel of cinema sound. 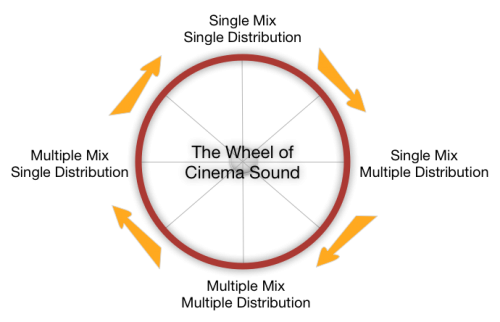