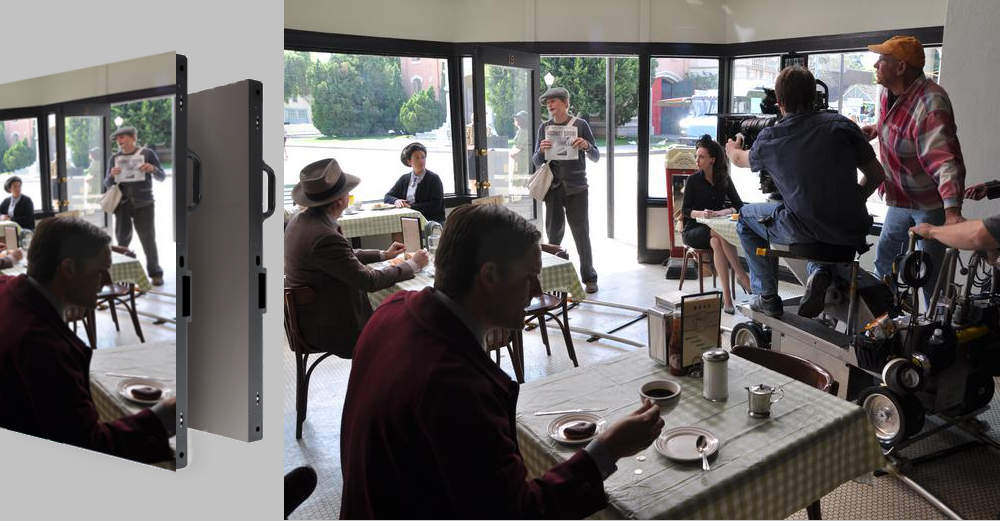 Coming to a cinema near you…one day
source:  ICAS shoot by Revelations Entertainment

I was recently asked a few questions pertinent to the introduction of cinema HDR (High Dynamic Range). It reminded me that many cinema technologists walked in through the digital cinema door, with little history of how we got here. My lengthy response was a bit more than the editor was seeking, so I polished it up for posting here.
Below are the questions, followed by my response:

Question #1: If the switch from 35mm film to digital was characterized by open standards and DCI specifications, will it be the same for HDR?

Question #2: As digital cinema approaches its first major wave of technology refresh, what is the Hollywood studio position with regards to HDR technology?

Question #3: What is the role of the American Society of Cinematographers (ASC) Next Generation Cinema Display Committee in this next phase?

I characterize the digital cinema transition differently, which is important to understanding my view on HDR. SMPTE and DCI played important roles in the transition from 35mm film to digital, but I would say that the primary forces in the transition were the studio will to subsidize the transition, and Texas Instrument’s extensive effort in developing projection technology that met artistic approval. In fact, TI’s role was quite important, as it was TI’s license of its color technology to multiple projector manufacturers that ensured color consistency in the field.

DCI played an important role during the transition, which can be divided into two parts: the need for studios to jointly develop the means to secure digital content, and the need to create a shared technology specification that would guarantee a secondary equipment market. Supportable evidence for a secondary market was necessary for banks worldwide to finance approximately US$7B of equipment that didn’t previously exist. Most people know what a virtual print fee subsidy is, but it’s not widely understood that compliance with the DCI spec was written into every VPF agreement. This not only ensured proliferation of the spec to the benefit of distributors, but no less importantly, it created an equipment market worthy of investment.

The situation for HDR is quite different. Cinema HDR is not positioned to disrupt the market with the wholesale replacement of projection technology. The digital transition is behind us: studios no longer subsidize the purchase of digital equipment, and compliance to the DCI spec is no longer tied to equipment financing.  Without money behind a new specification, the introduction of cinema HDR will be incremental to the work already done, and subject to market forces.

Looking back in time, the cinema market today looks a lot more like the cinema market of the 80’s and 90’s than that of the digital transition. In the 80’s and 90’s, technology companies were in command.  It was technology providers who invested in and brought new capabilities to cinema. I can’t think of a case from that era where a shared specification or standard was required. That doesn’t mean there weren’t complaints stemming from the lack of standards, but complaints didn’t get in the way of market success for the technology companies.

The best example of this trend in today’s market is from Dolby Laboratories, which is one of the few technology companies in cinema with market DNA from the 80’s and 90’s. Dolby successfully introduced Atmos technology to the digital cinema market, without the upfront need for new industry specifications and standards. Where special software was required in digital servers, Dolby went directly to the server companies to license them. To be sure, there is now a standards effort to ensure efficient distribution among competitive technologies, but momentum for a standard came well after the successful introduction of Atmos.

HDR cinema, however, can’t be so cavalier.  It’s possible to create private ecosystems for HDR, of which more than one exists today.  But a competitive market must exist for sales of HDR technology to grow, and this requires standards.  Unlike standards and specifications generated to enable the digital transition, those for HDR cinema will be driven primarily by technology providers.

This perspective should help to understand my answer to the second question about how the content industry views cinema HDR. In the digital transition, studios were guaranteed to benefit from the substantial reduction in distribution costs.  Therefore, it made sense to write big checks to subsidize it.  HDR cinema, however, does not present a savings of any kind.  More likely, it will increase production and distribution costs.  It’s unrealistic, therefore, to expect studios to write big checks to bring HDR to cinema. Going back to my earlier analogy, HDR will come to cinema in the market-driven manner that new technologies came to cinema in the 80’s and 90’s. Likewise, the production and distribution of HDR cinema content will be driven by box office.

That leads to the third question about the efforts ongoing in the ASC. The ASC’s Technology Committee recently reorganized as the ASC Motion Imaging Technology Council. There are numerous committees in the Council, and I co-chair the Next Generation Cinema Display (NGCD) Committee. We changed the committee’s name a few years ago to include “Display” in anticipation of the emergence in cinema of HDR-capable direct LED display technology.

Cinema HDR will be driven by market forces, but there are unique values in cinema that must be preserved which cannot be left to market forces. Preservation of values requires effort, and there is an urgency to this, driven by a “grand alignment” of market forces. Virtual print fee subsidies are coming to an end, freeing up equipment tied up in CDOs. Maintenance costs are rising for older equipment, setting up an equipment refresh cycle. The HDR format is emerging, with HDR-equipped sets rapidly taking over sales in the home entertainment market. And new technology is emerging in cinema that can deliver an HDR experience. The market is ripe for new technology, which will invite a new wave of manufacturers to the market. The digital cinema transition benefited immensely from a dominant technology provider that licensed competitive manufacturers.  But the industry will not have such a benefactor to rely on for HDR. So other institutions must stand up if the high standards of cinema are to be preserved.

The mission of the ASC NGCD Committee is to critically influence image quality and consistency in the field. A year ago, we released the ASC Cinema Display Evaluation Plan & Test Protocol, available online, to guide a study of dynamic range from the artistic view. But the industry pace has picked up, and we are widening our scope. With support from EFILM and other industry organizations, we are assembling a collection of content for evaluation on a cinema-sized HDR display later this year. We will evaluate the influence on artistic values of peak white, frame rate, dynamic range, dynamic luminance adjustment (if present), limited resizing, and compressed bit rate with HDR content. The output of this effort will be to issue appropriate recommendations.

Special attention must be given to the preservation of color consistency as new manufacturers enter the market. The color consistency required of cinema has no parallel in home entertainment. Design guidance and a vetting process is needed for new cinema display products, and the ASC will likely play a role.

Organizing manufacturers will also be an important step towards the successful introduction of HDR to cinema. Such an entity would be home to ASC recommendations and a body for driving standards and compliance. Formation of such an entity is beyond the scope of the ASC, but the ASC is working with manufacturers to explore the formation of a manufacturer’s organization.